If you think I’m old, you should see my granddad.


I went to another audition for a commercial yesterday. My agent told me, “You’re up for ‘Old Man in Pub’, sweetie.”  “Fine” I said, “I’ll spend the evening researching.”


I’ve been going up for “Old Man” parts for three or four years now. I still can’t get used to it. Mentally I’m 25. The rare occasions I hear “Satisfaction”, I still do a Pavlovian Mick Jagger wrist flick. I just do it sitting down, that’s all. I still hum the words of “Sister Ray” to myself. I’m young inside. So why can’t they just film my mind?


I don’t dress old. I wear Paul Smith jackets and Ted Baker shirts. OK, underneath there’ll be a T shirt from Next. It’s like hiding a copy of  “Bouncing Jugs” under the covers of the Times Literary Supplement. I stop well short of metrosexuality - if you gave me an exfoliant I’d probably spray it on the windowbox thinking it was a weedkiller.


If I’m up to play an old buffer, a properly old buffer, not an elegantly ageing lounge lizard such as myself, I sometimes wear an Oxfam tweed jacket and grow a day or two’s stubble. I might have to change tactic because it’s the trendy thing for young men these days. That Steve guy on “The Apprentice” looks as if he’s got an army of ants crawling across his chin. Must be very scratchy. So, before going to the casting, I gave myself a serious reality-check age scan in the mirror.


It was like seeing myself for the first time in twenty years. I looked old. It wasn’t the whisker shadow or the elbow-patched jacket. It was gravity. It was wear. It was the collagen-suck of time. I looked like the kind of barmy old codger who sits on a barstool in the pub and moans all night long about the dustbin service. Hang on, that’s exactly what I do do.


I entered the waiting room and eyed the competition. I nearly shrieked with joy. Opposite me was as grey-haired a bunch of affable elderly luvvies as you’d find in – well, in a casting studio up for the part of Old Man in Pub. None of them with stubble. None of them with Oxfam jackets. All of them 75 years old, if a day. As we nattered, I sang in my thoughts, “I’m the younger generation, and I’ve got something to say!”


The casting went fine. I haven’t a chance of getting the part, though. 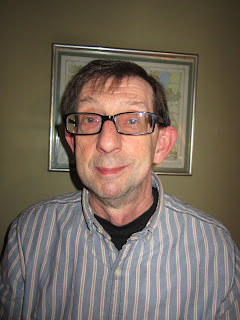