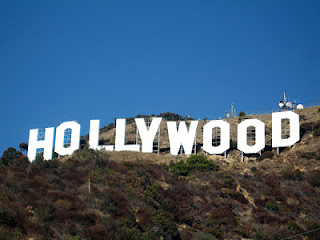 It’s that Reese Witherspoon. All day long she rings, tweets, facebooks me. Do I want to hang around over a Big Mac, do I fancy a movie….. it’s sort of nice, but I’m feeling smothered. I keep wanting to tell her, “Reese, honey, I’m already spoken for. I’ve been Julia Robert’s other half since 1992. If she was good enough for me then, she’s good enough for me now.”  The trouble is, Reese is a real sweetie and I don’t want to hurt her feelings.

So I meet up with George and natter about it. George – sorry, I should have said my old pal George Clooney, don’t know if you know him – says, “Tony, it’s a job for another woman. Get one of Reese’s very best friends gently to put her in the picture about you and Julia.” For this I buy George a beer. He appreciates it. He’s been a bit on his uppers lately.

So I take Scarlett Johansson out for a coffee to speak to Reese as they’re very friendly with each other. I’ve just told her about Reese's stalking when I notice Scarlett is gazing up at me with her head in her hands. She’s not listening. “I’d love another coffee” she says.

Next day I’m getting tweeted, rang and facebooked by Scarlett as well as by Reese. Every quarter of an hour my phone bleeps. I call up George for some more good buddy advice. He brings along Shailene Woodley – a sweet girl, they seem to be thick. I tell him how I’m not getting a moment’s peace from Reece and Scarlett and, frankly, it’s got to stop.

“Tony, you seem to get all this unwanted attention from lovely women” says George, “it never seems to happen to me!” Shailene is looking up at me with her big eyes. “I can see why” she murmurs.

Next day I get tweeted, rang, facebooked and emailed every five minutes by Shailene, Scartlett and Reese. Julia’s beginning to notice something. Maybe it’s my blush when I get one of their fizzier messages. Something’s got to be done. Time for George again, who, although edgy about losing Shailene, always appreciates it when you buy him a beer.

I tell him that my life is being wrecked by the harassment I’m getting from beautiful people who don’t understand that I just want to be left alone. I break up mid-sentence and rest my head in my arms, sobbing. I control it and sit up, trying to smile.

“It's the first time I’ve looked at a guy this way,” says George, “Fancy giving it a go?”

So now I'm being tweeted, rang, facebooked and emailed by Reese, Scarlett, Sheilene....and George.....
Posted by TonyK at 12:33