Dancing in the Patio 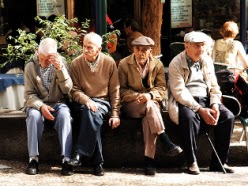 “What do old people do at parties?” That’s an idle question My Teenage Self would ask occasionally, in between doing more interesting things such as spraypainting his bedroom slippers silver and flicking his fingernail dirt at the settee.

I’m in a position to report back to MTS. I was away at the Kirwood sister’s place in a Gloucestershire village over the weekend where we went to a do with friends down her lane.

We also talked about holidays in Portugal and Mrs K’s choir singing. “Boring and trivial!!!” snorted MTS. “You didn’t talk about anything really important.” “Such as?” “Such as…such as… such as whether John Lennon wears contact lenses. Or did Derek Abbot at the end of the street really do 69 with a girl?”

“How about this?” I replied, “We also talked about the visit of Rowan Williams to the village the next day.” “HUH! I bet you didn’t roll a single joint. I bet no one puked over the roses. I bet you didn’t play Jimi Hendrix so loud that the neighbours called the police!”

“That’s because we were the neighbours. And what’s so bad about puking over roses? It fertilises them. Though I suppose it depends what’s in the puke.”

“Huh,” he snorted again, “A bunch of nobodies.”  “One of them was a District Councillor,” I answered hesitantly. “Traitor! Mixing with authority figures!” screamed MTS
.
I explained how we actually talked to each other, were still able to remember most of it the day after and how no one at any stage hunched over a mobile phone or glued themselves to their ipod.

He’d be OK about that. He hasn’t a clue about those things either.
Posted by TonyK at 13:29