Every day’s a bad hair day 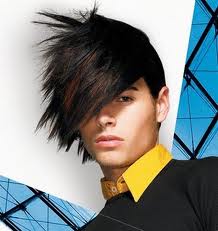 It's just not me


Haircut today. These days I leave it for months. It’s lost its fun. Gone are those happy decisions: Jon Lord mane, David Bowie mullet or Kevin Keegan frizz? These days I come out either nondescript smarmed-down or nondescript wispy. It’s been a successful cut if I can look in the mirror without reaching for a crucifix.

I had a woman this time. She was about 25 and approximately Polish. That’s fine. Poles are nifty at skidding a plastering trowel round a wall so I felt sure she could whisk a pair of scissors round my head. And a woman isn’t going to ask embarrassing questions about wanting something for the weekend.

OK, her conversation wouldn’t have got her on the Jonathan Ross Show: “And so we are feeling good today, yes sir?” But she snipped away with panache. Then she said “Is that so good for you sir?” and held the mirror behind my head. I groped for my specs as without them it’s a bit like looking through a windscreen in a blizzard. I stuck them on and gaped.

I had a mat of hair flopping over one side of my face with a six inch fringe drooping over my right eye. She’d given me an Indy band cut. My hair looked like a hamster slipping off the edge of a cliff.  I had a stark choice. Either an emergency administration of botox to make me look 20, or a drastic trim off the top of my head to make me look 60.

“Noooo!” she cried. It was her masterpiece and I wanted her to desecrate it. I normally give barbers free rein but I put my foot down. A few snips later and I could face the streets. It’s all been another brutal reminder I’m way too old to look like a rock ‘n’ star.

Next time I’ll ask for a Miles Davis cut. It’ll look just as ridiculous on me but I’ll enjoy their confusion as they won’t know who the hell he is. And the music’s a lot better.