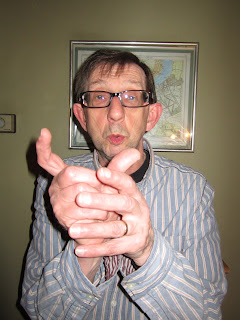 
Another commercial audition on Wednesday. This time it was for milk. I was up for the part of, wait for it, a milkman. It’s nice to know the old trades aren’t disappearing, at least not in adland. And good news, I got a recall. It must have been my delivery.
It was my first milkman. I’ve played vicars, mad scientists, monks, dyspeptic men (Rennies), school janitors and Spanish magicians. I’ve been up for farmers, postmen, flute players, referees, shop assistants, sneezing men, coughing men and the chemists who give them prescriptions. But I’ve never been considered for Romeo or King Lear, and although I spend a lot of time muttering to myself, I’ve never been called to play Hamlet. Mind you, how well would Hamlet do in a commercial casting?
That’s the great thing about acting. My eyesight’s probably too dodgy to retrain as a surgeon, my reflexes too creaky to step in as an airline pilot, but I can still do the necessaries in a commercial audition.  That is, give your name and agent to the camera, (OK, that can be tricky after a couple of pints the night before), and turn both ways to give your profiles. I’m not boasting when I say that the gracefulness and speed of my turns are Olympic class.
And in a hundred years’ time, even though they may be filming onto omega rays transmitted directly to the underside of peoples’ eyelids, acting will still be the same. People will play people. And if the part is someone like me, then you’re not going to ask George Clooney or Ben Whishaw, you’re going to use me.
So let’s get into practice. How many pints do we want today, Mrs Jones?
Except they almost certainly won’t be using milkmen in a hundred years.