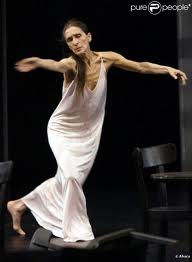 Pina Bausch. Great choreographer, but you try getting a drink out of her.


Maybe it’s my age. Maybe it’s the general crapness of things. But I’m increasingly turning from Polyanna to Rosa Klebs faster than a poisoned blade springing from a toecap.


Last night I went with my wife to see Pina Bausch. Not her personally – she’d dead – but her dance company. I’m not really a ballet kind of guy. Women wearing tutus should be put to work cleaning chimneys. People who inflict jetes and plies on the public should be whacked with an ASBO. But Pina appeals to the old hippy in me. Her choreography is wacky: her dancers go into twitchy spasms a bit like me at Glastonbury in 1973 except they’re on the beat. And they don’t wear tutus.


But I went straight from laidback flower child to Disgusted of Tonbridge Wells when the barman said he wasn’t sure I couldn’t preorder an interval drink.  “I’ve never heard anything like it. What’s the world coming to? If you think I’m sitting through three hours of dance without a drink then ….”


He made a phone call to the manager, okayed the order and we were pals.


“It’s for the whole season” she stammered.


“But I don’t want to see the whole season, I just want this show. How the hell am I supposed to know what’s happening without a programme?”


Actually in a Pina Bausch show nothing really happens, unless you count a woman punching a talking pillow, a waltzing couple twining toy snakes round their heads and bits of white paper falling down as stuff actually happening.


Other things which make me spit venom: people who put their feet up on train seats; people who end simple affirmative sentences with “yeah?”; people in front of you in the supermarket queue who hold you up as they dash back for forgotten items; people who text during performances…


The woman in front was fiddling with her glowing phone as the lights dimmed. I was getting ready to go into Rosa mode. Then she turned it off and settled back to watch the show. Inconsiderate bloody bitch.
Posted by TonyK at 11:42